“Few of us can easily surrender our belief that society must somehow make sense. The thought that the State has lost its mind and is punishing so many innocent people is intolerable. And so the evidence has to be internally denied.”
- Arthur Miller

As quoted by John Pilger:

As deserving as Blair, Howard and Uribe are of the Bush Freedom Medal, others cry out for a place in their company. With the assault on Gaza a defining moment of truth and lies, principle and cowardice, peace and war, justice and injustice, I have two nominees. My first is the government and society of Israel...

My other nominee for a Bush Freedom Medal is that amorphous group known as western journalism, which has always made much of its freedom and impartiality...

One day, other journalists and their editors and producers may be called upon to not only explain why they did not tell the truth about these criminals but even to stand in the dock with them.

Coping with a traumatised nation:

According to studies cited by the Afghan health ministry an astonishing 66% of Afghans suffer mental health problems.

And yet this hospital is the only facility in the country dedicated to mental disorders - and there are just 40 beds. ..

Because of a lack of understanding, many Afghans suffering mental health problems are believed to be possessed.

Some are chained in rooms or even caves until it is believed that the "jinns" - evil spirits - have been exorcised.

But others are simply abandoned by their families because they can no longer cope...

Posted by Jaraparilla at 12:35 No comments:

I wasn't going to stay up to 3 am just to see the inauguration, but my stupid neighbors had their TV on loud and it woke me up. So I went downstairs in time to confirm that George W. Bush really has gone.
Posted by Jaraparilla at 07:24 1 comment:

Only the Israeli press remain overwhelmingly positive. Funny, that.

Now where are them pardons?

Is it possible that Dubya could just walk away from the Oval Office and leave all his old friends in the lurch?

White House officials are saying they don’t expect any pardons or other acts of clemency by the president before he checks out of office Tuesday at noon.

If, in fact, there are no more pardons coming I won't be completely surprised. Pardoning the people below him would remove any 5th amendment reasons to not testify, and Bush has never shown much sign of giving a shit about other people.

The Fifth Amendment protects witnesses from being forced to incriminate themselves. To "plead the Fifth" is a refusal to answer a question because the response could form self-incriminating evidence.

Is Dubya gonna have the last laugh on Uncle Dick and friends? 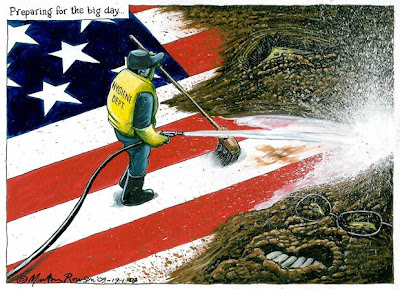 Much as I have been waiting and waiting for this moment, George W. Bush already left the stage, if not the building, a good while back. He's been talking about his "legacy" ever since he came to power, and he's talked of little else for the past few months, even while the world crashes around his ears.

So any sense of joy at his long overdue departure is tempered by grim realities.

I think we now live in a world where decency and integrity have gone out the door, perhaps for good, and we're just going to have to adjust to that. You cannot expect your government to do the right thing, not unless they are pushed, and even then only if they can see some clear self-interest in it. You cannot trust businesses to do the right thing either. And nobody will ever be held accountable again unless they can't afford to buy themselves out of trouble.

I guess this is what it feels like to live in a Third World country where corruption is deeply entrenched. Who'd a thought, eh?

Ted Rall and Tom Toles capture the mood (for me anyway). And Pat Oliphant too...

Wanker Of The Day

"Murdering the innocent to advance an ideology is wrong every time, everywhere."

To be fair, the neocon's farcical ideology was only every a cheap wrapping paper around the real goals of greed and power.
Posted by Jaraparilla at 14:57 1 comment:

As delivered by Dan Froomkin:

He took the nation to a war of choice under false pretenses -- and left troops in harm's way on two fields of battle. He embraced torture as an interrogation tactic and turned the world's champion of human dignity into an outlaw nation and international pariah. He watched with detachment as a major American city went under water. He was ostensibly at the helm as the worst financial crisis since the Great Depression took hold. He went from being the most popular to the most disappointing president, having squandered a unique opportunity to unite the country and even the world behind a shared agenda after Sept. 11. He set a new precedent for avoiding the general public in favor of screened audiences and seemed to occupy an alternate reality. He took his own political party from seeming permanent majority status to where it is today. And he deliberately politicized the federal government, circumvented the traditional policymaking process, ignored expert advice and suppressed dissent, leaving behind a broken government. 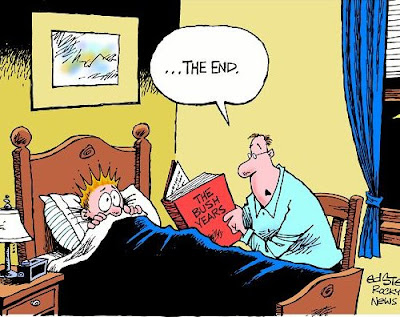 I have a little book of American Indian quotes at home. One of them is from Chief Lone Wolf, who said something like this:

"I have learned that a man cannot accomplish any great deeds on his own, without the help of others."

Despite the friendships I made along the way, I always felt very alone throughout this whole endeavour. Looking back now, nearly six years since I first started blogging, I realise that in fact there were plenty of other people saying what needed to be said.

At the time, I thought that I had to keep shouting and shouting and shouting, because if only everybody could hear the horrible truth, something would be done about it. It drove me to the point of madness, in some respects, and I apologise if I sometimes vented my anger or verbally abused anyone from pure frustration.

Of course, there were exceptions. And somehow the whole horrible truth eked its way out into the collective consciousness.

But I can't help thinking that it was the disasters - Katrina, Iraq, Wall Street - that really got people's attention, not the voices of reason, who were mostly limited to reading one another on the Internets.

If Iraqis had meekly succumbed to their new masters, if New Orleans never got flooded, if the great Ponzi scheme was still floating, would anybody even care about the rest of it?
Posted by Jaraparilla at 09:44 2 comments:

It Was A Dark And Stormy Night...

"I'm going out with a good heart," Cheney added.

"It's been a tremendous experience. It's been great serving with this President. And I think we did some good work. And I do look forward to family time, and a little more time on the stream and out in the fields.

Posted by Jaraparilla at 14:23 No comments:

Change We Can Believe In

Aside from all the politics, the election of a black President remains a positive. OF course that doesn't mean racism is dead in the USA, but we have come a long way...

We All Collaborate In The Big Illusion

Money was always an abstraction but now it has been spun so fine its very existence is a thought experiment. It has broken free from its earthly bonds and escaped into the conceptual world... Money turns out to be whatever we agree it to be. It is a collective work of the imagination.

This is why I could never make a good businessman. I am just not that big a gambler. And part of me is just plain stubborn, and recoils at such madly illogical groupthink.

Is it really true that we agree to 'collaborate in the illusion of value' or is it the case that we have, in reality, no actual choice whether to agree or not? We know that money is a communal abstraction - an intellectual and pragmatic 'concept-in-action' - but what if it is an abstraction we want to take no part in? ... A remarkably small number of people control the world economy and an unbelievably high number are negatively effected by them. If we could choose to disagree with the abstraction then the illusion disipates and we all go back to zero......

And then there's this:

I feel the need for some scapegoats to bring back my confidence in this magic nonsence we currently call money.

Blair, Brown and Darling in jail would possibly do it.

Well, exactly. If we are all expected to collaborate in the illusion, at least we should expect everybody to play by the rules of the game.

As it is, the same insiders from Goldman Sachs who caused the current financial crisis are now in charge of getting all the loot out of the building fixing it.
Posted by Jaraparilla at 09:02 2 comments:

Why Do They Hate Us?

That was the question everybody in the USA was asking after 9/11, if you remember. At the time, international news coverage in US newspapers was down to extraordinary levels, even by US standards. Since then, wars and other ventures abroad have ensured lots of overseas news. But the question remains unanswered, because the answer is too horrible for most people to admit.

Twenty Israelis dead in 10 years around Gaza is a grim figure indeed. But 600 Palestinians dead in just over a week, thousands over the years since 1948 – when the Israeli massacre at Deir Yassin helped to kick-start the flight of Palestinians from that part of Palestine that was to become Israel – is on a quite different scale. This recalls not a normal Middle East bloodletting but an atrocity on the level of the Balkan wars of the 1990s. And of course, when an Arab bestirs himself with unrestrained fury and takes out his incendiary, blind anger on the West, we will say it has nothing to do with us. Why do they hate us, we will ask? But let us not say we do not know the answer.

Posted by Jaraparilla at 08:53 No comments: 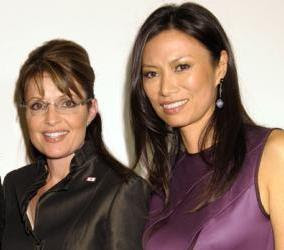 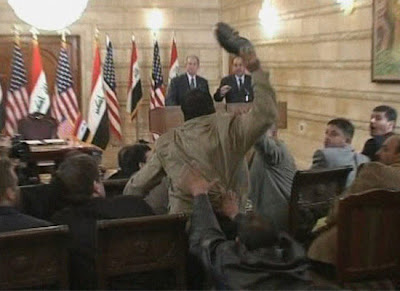 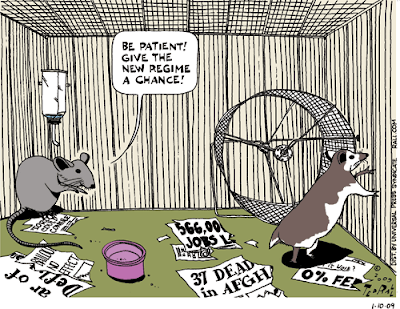 Posted by Jaraparilla at 08:09 No comments:

Same spin in the press. Including the obligatory Murdoch contribution to the madness.

Same result: death and disgrace.
Posted by Jaraparilla at 08:00 No comments:

"I think that history will look back at these eight years and say they were the Cheney years ultimately."

Or more likely the Neocon crazies' years. Or the Kleptocracy years.
Posted by Jaraparilla at 06:54 3 comments:

McGovern says the new CIA guy is OK - that'll do for me, for now.

But we still need a (soft) revolution.
Posted by Jaraparilla at 23:27 3 comments:

The Truth Can Be Found

here
Posted by Jaraparilla at 14:10 2 comments:

During an interview Thursday with The Associated Press in his West Wing office, Cheney defended the administration's performance on an economy that is growing weaker daily and which recently collapsed in spectacular fashion. Cheney said that "nobody anywhere was smart enough to figure it out."