How Bush's Friends Manipulated Oil Prices For The '06 Mid-terms

"I mean if anybody says there's some magical solution to the high price of petrol in Australia, will you please ring the Lodge and I'll spend an hour all-ears listening to them."
- Australian Prime Minister John Howard, August 1st, 2006

It was August 1st, 2006, when Howard made this disingenuous remark. The oil market had soared to record highs (over $US78 a barrel) in mid-July. There was widespread consumer anger at ever-rising bowser prices and record oil company profits.

And yet, by the time US mid-term elections came around three months later, the oil price had fallen a massive 20 percent.

And now, with the US elections over, oil prices are on the rise again.

Surprised? You shouldn't be. The big question is, how did it happen, and why?

First, let's look closely at what happened. Here, courtesy of Blogging Stocks, are the average weekly U.S. average price for Super Unleaded for that period (based on data from the Energy Information Administration):

Note the low point of $2.39, achieved in the week just prior to the US mid-term elections, and held to the very day before the election. This fine tuning by US oil retailers was no accident, either. Can you say "price gouging"?

Specifically, on November 6th, the ratio of the price/barrel of gasoline at the pumps and price/barrel of crude oil fell to 167% -- significantly lower than the weekly average of 174% between August 21st and November 20th.

The conventional wisdom holds that the US government cannot significantly influence world oil prices, except through manipulation of the US strategic reserve. But in a globalized world, that sort of thinking is sorely out-dated:

During a meeting in the Oval Office, according to [Bob] Woodward, Bush personally thanked Bandar because the Saudis had flooded the world oil market and kept prices down in the run-up to the 2004 general election.

The remarkable link between the price of oil and Bush's popularity has already been well documented: 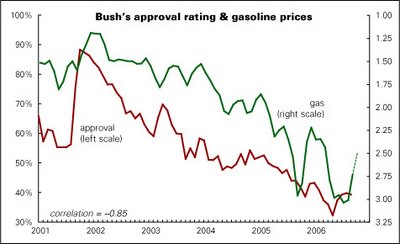 Many people reading this article will not be surprised by such data. A USA Today poll in September showed that a massive 42% of Americans thought the Bush administration "deliberately manipulated the price of gasoline so that it would decrease before this fall's elections." White House spokesman Tony Snow was forced to address the mounting speculation at a press briefing:

"I have been amused by ... the attempt by some people to say that the president has been rigging gas prices, which would give him the kind of magisterial clout unknown to any other human being. It also raises the question, if we're dropping gas prices now, why on earth did we raise them to 3.50 dollars before?"

Well, that was a stupid question from a stupid man. Obviously, if the oil industry is supporting Bush, it is expecting massive profits in return. And that is exactly what they have been getting. Well over a quarter of a trillion dollars, in fact.

The real question is not why they manipulate oil prices for political profit, but how do they do it?

In the case of the '06 mid-terms, it was a two-pronged attack. On the one hand, we had the Saudis and other pro-US players in the Middle East playing a delicate balancing game by promising their OPEC friends that they would cut production, but then failing to commit to the cuts and even raising production slightly instead. The market reaction was an interesting and significant factor here: none of the experts actually believed that OPEC would cut production before the US mid-terms, so the price never went up.

On the other hand, we had Goldman Sachs dumping more than $6 billion in gasoline futures contracts. This move was like a clarion call to the markets: when the big funds change their weighting, smaller funds quickly follow suit. Even if the move is actually contrary to market realities, it doesn't matter. As Lew Rockwell explains, what Goldman Sachs did is called "painting the tape":

Goldman doesn’t lose money. This is a managed commodity index. Goldman manages the index, but the actual money put up comes from institutions, hedge funds and other unlucky saps that trusted Goldman to manage the commodity index as a hedge against inflation – not to bail out of $6 billion in contracts over a few weeks. The result: Unlucky saps – Major losses. Goldman – Zero losses and their man running the Treasury. Which side of this trade would you want to be on?

It's worth noting here that Henry M. Paulson Junior, the 74th Secretary of the Treasury, appointed by Bush in June, 2006, was the former Chairman and Chief Executive Officer of Goldman Sachs. In Wall Street slang, he's now a big part of the US government's Plunge Protection Team.

If you want to understand how such people think, I recommend you read this speech by Dick Cheney in 1999, when he was still CEO of Halliburton. Here's an appetiser:

"I'm often asked why I left politics and went to Halliburton and I explain that I reached the point where I was mean-spirited, short-tempered and intolerant of those who disagreed with me and they said "Hell, you'd make a great CEO", so I went to Texas and joined the private sector."

Ha ha. But Cheney never took his eyes off the political ball:

Frankly the focus in today's economy on globalisation and emerging markets is old news to the oil industry. Ours are global companies investing outside the industrialised companies at the turn of the last century. People need to realise that the energy industry often represents the largest foreign investment in many parts of the world and its interest, insights and experience need to be considered. Oil is the only large industry whose leverage has not been all that effective in the political arena.

Cheney was effectively putting up his hand and shouting:

"You want political leverage? Pick me! Pick me!"

Cheney and Bush later became the first ex-CEO double act to control the White House, and both oil men to boot. One of Cheney's first acts was the convening of highly secretive Energy Task Force meetings with major Big Oil players. Bush then invaded Afghanistan, launched a failed coup in Venezuela, and occupied Iraq. Surprised? You shouldn't be.

People in the know do not seriously expect the USA to ever withdraw US forces from Iraq and lose control of that oil. Ever. All that talk about a military withdrawal was just window dressing for the electorate. Just like the oil prices. When you hear Bush talking about closing down the USA's permanent military bases and handing the Green Zone over to the Iraqis, let me know.

Many people criticize Bush as a bumbling incompetent, because they judge him as a supposed representative of the US public's interests. But Bush's masters are actually the richest of the rich, a global elite who flitter from country to country in private jets, and they think he is doing a fine job, a fine job indeed. As Bush famously told a charity dinner crowd in 2000:

This is an impressive crowd — the haves and the have-mores. Some people call you the elites; I call you my base.

In the same way, people often think of the Iraq invasion as an attempt by the USA to seize control of Iraq's oil, but in fact the USA just supplied the troops, the Big Media spin and the strident voices at the UN. The US tax-payers funded the project, but they will never really profit from it.

It was Global Big Oil who sought control of Iraq's oil. And the big deal is finally about to go down. When the Iraqi puppet government signs the Oil Law later this year, US-based Big Oil companies will be assured massive profits for generations to come. For more on this, read Joshua Holland's excellent two-part article at AlterNet.

Of course, the oil-price-fixing ploy was not 100% successful this time around: Bush was "thumped" in the mid-terms and his GOP party lost control of both the Senate and the House. With Democrats finally back in control, maybe we will finally get to see the minutes of Cheney's Energy Task Force meetings. But don't hold your breath. Big Oil has deep pockets and many friends in high places.

UPDATE: Joshua Holland points out that the Bush administration, with it's close links to Big Oil, can easily influence prices with a few quiet words over a few whiskeys at lunchtime. Then you have things like the White House's abrupt decrease in anti-Iran rhetoric, which eased market fears. And then there's this sort of thing:

The three internal memos from Mobil, Chevron, and Texaco (Click here to read the memos.) show different ways the oil giants closed down refining capacity and drove independent refiners out of business.

And this Senate report (PDF) about collusion on the refining end has been going nowhere fast since 2001.

UPDATE 2: Someone at Australia's Department of Defence takes an interest in this story: 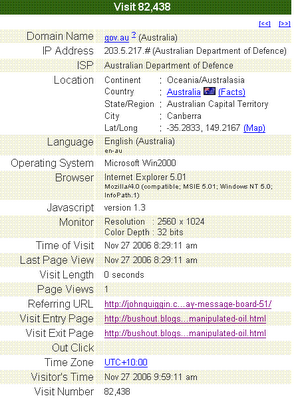 "We could have actually grown by 9-9.5 per cent, but for the increase in oil prices," he said at the India Economic Summit, organised by the Confederation of Indian Industry (CII) and the World Economic Forum, here today.

"There has been no change in demand and supply. How did prices fall from $78 to $58 per barrel? We must come to terms with the fact that oil producing countries are exploiting developing countries. The world needs to come to a sort of understanding on this issue," he felt.

Update 4: Also getting hits now from the US government departments of Health, Agriculture, Air Force and Army. Am I on some kind of list, or does this indicate a new culture of open-minded knowledge-seeking? 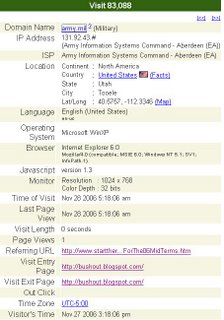 I am pleased and humbled to have this post featured by Josh on Alternet.

OTOH, it's surprising stories like this don't get MORE coverage. I think many people just read the opening paras and think either:

It's actually a huge issue, closely linked to vote fraud. There should be laws against this stuff! Are there?

OPEC pushes prices up over $62 a barrel. Latest here.

I would suggest that this trend, which I think has happened in at least the last 3 election cycles, indicates a two-fold and purposeful strategy by Big Oil and their beneficiaries, the GOP. First, the seething anger about energy costs, a perennial sentiment that never seems to really work out to the advantage of the DEMs, is replaced by a sigh of relief, despite the fact that prices are still higher than at the beginning of the strategy's implementation, and second, the portions of the huge profits get funnelled through any and all means necessary to the candidates of choice, effectively making the energy-dependent consumer pay the cost of getting Big Oil shills elected. Nice scheme...

This election season, Exhibit A for me is the fact that oil prices, which are always said to be most volatile during world crises, didn't jump during the Georgia invasion...in fact, they've consistently trended downward, in keeping with the above script...even though the future of Georgia's pipeline to the West is now out of the West's control. And now, after Hurricane Ike, the administration is jumping up and down screaming "price-gouging" when a few retailers freak that they might actually NOT have product to sell.